Echoes of Dawn: '...a zombie romance' 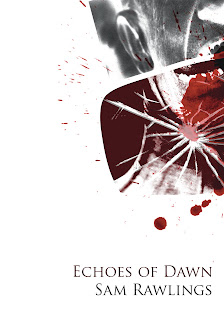 I was interviewed last year about my book Echoes of Dawn. It has previously been published as a limited edition booklet and was also included in Lazy Gramophone's The Book of Apertures project. The latest development concerning this journeyman of a tale, is a proposal for it to be turned into a full length graphic novel... I have both fingers and toes crossed! You can read my interview below:

Q: 'How would you describe Echoes of Dawn?'
A: 'Echoes of Dawn is a horror story, though it could also be considered a romance of sorts - a 'zombie romance' if you like. It is the tale of what happens when a young couple suddenly find their world disintegrating. With no other option but to run, the story is essentially what remains of the lead character's journals, a compilation of his writings and drawings. Echoes of Dawn is an attempt to make sense of what actually happened to the lead character and to those people around him, it is a fragmented history of a horrific period in time. It has been compiled in retrospect, with each section reflecting the different stages of his journey.'

Q: 'What were your influences when writing this story?'
A: 'More than anything else, this story has been influenced by film. While I was writing it I saw it as a very visual piece and pictured each 'revolution' as representing a scene from a much larger story. Essentially, I wanted to offer readers the spine of the story, therefore giving them the opportunity to use their own imaginations to colour in the rest. At the time I was watching a lot of westerns and horror films. The two horror films that particularly inspired this story were The Hills Have Eyes remake and Switchblade Romance, both directed by Alexandre Aja. However, more importantly, Clint Eastwood's Unforgiven and Dead Man by Jim Jarmusch, were really inspirational and very much the catalyst for the style of my story. '

Q: 'What would you like to convey through this story?'
A: 'In reading this story I hope that people will use their own frames of reference, their own opinions and perceptions when interpreting the story. In accordance with the themes that I was writing about, I didn't want to prescribe a story. Instead, I wanted to write something that engaged the reader, challenged them, the answer will not fall at your feet, it must be pursued.'

Q: 'What are the themes of the story?'
A: 'Echoes of Dawn is a kind of social commentary; it is a warning of what might happen if hope and love continue to be prescribed. If 'we' continue to tell people in such certain terms and in such unforgiving ways how they should behave, what they should aspire to, if we continue to prescribe lifestyles like we are doing, forcing pegs into holes, eventually something is going to give. Or maybe we have already gone..? Maybe, instead of rising up and striking out, we have already, quietly succumbed? Maybe we are already like the creatures in my story, wandering the earth, fuelled only by an empty consumerism, by the hollow desires of a past and a future that we have never been inspired to truly comprehend. Yet, even scarier still, what if one day we wake from this unprepared, unarmed and alone, the world still intent on consumption. What would you do then? When suddenly you realise that all of the things you thought you had chosen to love (even the one person you had chosen to love), had in fact, now, unrelentingly, chosen you.

'He who binds to himself a joy
Does the winged life destroy;
But he who kisses the joy as it flies
Lives in eternity's sunrise.'
(William Blake, 1757-1827)

This is the poem that inspired my story. In writing Echoes of Dawn, my aim was to turn Blake's idea on its head. The lead character in my story need not worry about binding himself to the joys of life, for it is actually he who finds himself terminally bound to them.'
Links:
- Echoes of Dawn is currently on sale in the Lazy Gramophone Shop

Hello, and thank you so much for leaving your words upon my doorstep... it's always such a pleasure to hear your thoughts.

An oversized rocking chair, wood slowly splintering as if the emigration of a thousand tiny spines. They rise up, out from within its heavy arms and like flames their flickering reaches for the window. Each one a dusty tear blurring its single eye. In order to watch he tilts his own head, doubt blinded by emotion as they begin to spiral toward the black glass. Lids heavy, his slit of concious drawn to a close by the cacophony of what formally had been such seasonal tides. And so this winter hope's grin springs from the warmth of bulbs, the spread of his desk fallen icy cold. Fingers skate before him and yet still those memories sing, twist his ear lobes first east and then west. As always, the pendulum swings.

Another moon chimes, the attic silence of old unfolding as if a new born flock of wings, air undulating as their limbs slip from the darkness. So once again the sands of time begin to decend, each grain drawn from the crest of mourning, herself a falling lament. Flakes of white, her toes reach for the crumpled yellow canvas, narrow eyes drawn against the tumbling shafts of light. Her lashes palms, their silhouttes stencils, petals enveloped by the eternal blue hearth she waits, for the sun's incandescent ashes to curl around her limbs, begin to swirl within the plams of her cupped hands.

The day blinks, all thoughts suddenly fireflies. The glow of yesterday's embers smoke beneath my soles sat so coldly now upon the doorstep; eyes to the sky, my cradled coffee cup and I, the winds silent reproach. Dreams rise shyly, with wry smiles freckle the night. Stll though I hear them whisper... '...listener? Once woken, be sure to sleep tight.'

ROLL UP, ROLL UP... Circle Time by Sam Rawlings - ON SALE NOW

A collection of sketches: simple and honest, these poems seek to placate experience and depict the eternity beyond our landscape.

Written by Sam Rawlings, and with illustrations by Dan Prescott, Circle Time is an exploration into the nature of human experience. It focuses upon the way our emotional lives spiral as we grow older, the ways in which the echoes of our past are carried through time.

"A keen sensitivity to the relation between sound and meaning." ~ Sabotage

Click here for a full introducton to Circle Time.

ROLL UP, ROLL UP... Echoes of Dawn by Sam Rawlings - ON SALE NOW

About Echoes of Dawn (Limited Edition)

Written by Sam Rawlings and illustrated by Matt Black, this assembly of graphic memoirs reveals the story of two young refugees and their attempt to chase down an endless dawn.

Some of my favourite Blogs...

Sam Rawlings
Books have always fascinated me. I began to develop my own writing through the study of poetry. My poems have since appeared in a number of literary magazines such as Fire, Obsessed with Pipe Work and Harlequin. After university I went on to co-found Lazy Gramophone. It was during this period that I published my first book, Circle Time. Lazy Gramophone led me to appreciate the value of collaboration. I have since invested a lot of time and energy in editing two large collaborative projects; The Book of Apertures and Time. Storytelling seems now to have become the main focus of my work. I have published numerous stories, both within The Book of Apertures and Time, as well as within the Lazy Gramophone Shorts series. A limited edition print run of my apocalyptic short story Echoes of Dawn remains on sale in the Lazy Gramophone shop. As for the present; well, I grow increasingly obsessed by the building of worlds and particularly enjoy stories that contain an element of magic as well as a good deal of adventure. My current work in progress reflects a fondness for these things - I hope to release it one day soon.

Where to Find Me:

ROLL UP, ROLL UP... The Book of Apertures, edited by Sam Rawlings - ON SALE NOW

About The Book of Apertures

For the last two years our collective group of young, emergent writers and artists, have been hard at work. Arising from the relative obscurity that encircles each of our lives, this book has been born quite simply,out of our shared passion for storytelling.

The central theme of the book focuses on exploring those unexplainable elements of life that one time or another, affect us all. As children particularly, we have all used our imaginations to conjure up explanations for the things that we didn't quite understand, and so, in creating this book, the writers and artists were asked little more than to develop this idea.

Therefore, with an emphasis upon collaboration, containing fifteen short stories and nine poems by fourteen different writers, exhibiting forty-one pieces of original artwork by nine different artists, The Book of Apertures represents a series of explorations into the enigmatic nature of life, as viewed through each contributors personal aperture.

"In a time when publishers are taking fewer and fewer risks on unknown writers, Lazy Gramophone are to be applauded for giving their collective a chance to shine.” - Litro Magazine

"A wonderful environment of ideas and imaginings - The Lazy Gramophone group as a collective have demonstrated a remarkable and inspiring ethos throughout and their willingness to provide a means of expression is second to none.” - Amelias Magazine

"A Handsomely produced Book (The Book of Apertures).” - Philip Pullman

Click here for a full introduction to The Book of Apertures.

The Brilliant Artists I Have Been Lucky Enough to Collaborate With:

ROLL UP, ROLL UP... Skeletons in the Closet by Lazy Gramophone Press - ON SALE NOW

About Skeletons in the Closet

Featuring my short story Hotchiwitchi (which was wonderfully illustrated by Rima Staines), this booklet was the first of the Lazy Gramophone Shorts Series. 'Skeletons in the Closet' brings six writers and six illustrators together in collaborative beauty. Printed in a limited edition of 60 with a unique letter pressed cover and high quality digital interior these booklets encompass the theme of hidden secrets in an original and creative manner.

Click here to read about the production process of the letter pressed cover.